As most of you know, the NCVA marched in last Sunday’s Capital Pride Parade. Thanks again to David Fournier for making it all happen!

Proud NCVA representatives, variously disguised as cows, peas, and carrots, marched under the banner “Peace for all who live.”

Our goals:
1) To support GLBT pride;
2) To advertise the NCVA to the GLBT community and its supporters (and the one guy with the bible-scripture placard which I couldn’t read from where I was but which presumably asserted that being gay is bad);
3) To encourage people to constantly examine their beliefs, since dumb ones can heap serious suffering on what should be beautiful lives.

Masses of parade-goers we’re completely blown away by the lovely Dulce Darling. Unspeakably graceful in 6-inch stilettos, she is the new gold standard for “tall, gorgeous blonde,” and also my new crush. Given she’s a gay man who was dressed as a woman at crush onset, my mom says my smitten-ness just makes me a masochistic straight girl, My dad, however, insists that it places me in a unique and heretofore unrecognized category of sexual orientation that could totally become a thing.

Unfortunately, several parade-goers were also blown away by the fringes of hurricane Irene. Happily, our marchers were spared this fate, being weighed down by bellies full of vegan donuts.

Also on the upside, Irene’s shadow ensured that none of the usually-hidden body parts on display at the parade had to pay for their brief freedom with sunburn.

On the whole then, a successful and inspiring event. We look forward to participating again next year when, once again, we’ll spread the pro-veg message and tell the world that vegans really do taste better (like donut, I hear).

So Neil and I went to the new Preston St. farmer’s market last weekend. It’s a very little affair – maybe 12 or so vendors. Mostly veggies. Joel’s coffee (not organic, but Fair Trade and good – and the vendor gives samples, just like with wine!). Moksha Yoga was there too, looking vaguely out of place as they did upward dogs and sun salutations, but good on them anyway.

What we were quite shocked to find at the market, however, was a new vegan bakery. It’s called “Jacqui O’s Sweet Temptations,” and it offers a variety of cupcakes, muffins, and cookies, as well as baklava, brownies, focaccia and sticky buns. I’d say at least half of its offerings were gluten free, and some were sugar free as well.

In the interest of doing a thorough review, I bought several items: sticky bun, brownie, cupcake, baklava and a cookie.

My expectations were pretty high. As a holder of many university degrees of varying usefulness, I get excited by credentials and Jacqui was trained at the George Brown Culinary Institute.

I can, in general, say that I was pretty impressed. The chocolate peanut butter pillow cookie represented the best execution of that recipe I’ve tasted so far (except for Neil’s, but I suspect I’m biased). The cinnamon buns were GOOD. I’ve never had a vegan cinnamon bun that was good before. Other than mine, but again I’m probably biased. And in fairness I’ve never tried either Pamela’s or Auntie Loo’s.

The lime-coconut cupcake was also the best execution of a citrus-based cupcake that I’ve had. Aw crap, except for my orange one, of course. And her frosting is actually better than Aunti Loo’s and Thimble Cakes’. Very lime-y without being runny – how’d she do it?

The baklava, which I bought based on raves from Jacqui’s other customers, was really good too. But honestly I think all baklava tastes the same.

I wasn’t wildly impressed by the brownie at first. The texture was good but it was a little on the bland side. It lacked the rich fabulousness of  – dare I say it? – “The World’s Best Fudge Brownie.” It grew on me as time went on however. Largely, I think, because the ganache topping tastes like Smartie chocolate. Yes, that’s right. The chocolate inside of those little candies that vegans can’t eat. Once I ate all that off the top, I was in a fine mood and the bottom somehow just seemed tastier. 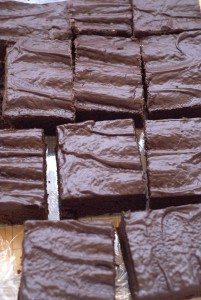 Anyway, she’s on Preston St. on Saturdays, Lansdowne on Sundays. Check her out there and visit her facebook page. It looks like she does way more than what she sells at the farmer’s markets, and from the looks of the pictures, the other stuff is amazing!

As you all must know by now, the NCVA is marching in the 2011 Capital Pride Parade this Sunday (August 28th).

Now, I didn’t plan the event this year –  NCVA darling David Fournier did all the work this time. Still, I figured I’d take advantage of the fact that I have the password to the NCVA’s blog to strongly encourage all Ottawa veggies to join us in this day of marchy vegan fun.

You’ll be promoting your beloved NCVA, supporting a population that has been treated very badly for deeply stupid reasons, and highlighting the parallels between the plight of animals and oppressed human groups…All whilst surrounded by lively music, adoring crowds, and outfits at once elaborate and very small.

Plus there are the donuts.

Once a year, just for this event, I make a batch of vegan donuts. Yes, the real, yeast dough, deep-fried donuts.

So please come and march with us.

I mean, don’t feel bad if you can’t or anything. We won’t be mad. And if I saw you on the street after I’d still be nice and would maybe even give you a leftover donut.

Actually, what I’d really do is that thing where you start to hand something over like you’re going to give it to a person then just stuff it in your own mouth and make whatever sound “HAHAHAHA” sounds like through a mouthful of donut.

Just kidding! In all seriousness, though, march with us if you can and if not, no prob. I won’t even call you a homophobe.

…Not to your face anyway.

*Sigh – they say I have to write: “The above is Erin thinking she’s funny and does not represent the views of the NCVA or its members, who all wish she’d grow up”

The NCVA will be marching with veggie pride this coming Sunday, August 28, 2011 in the Capital Pride Parade commencing at 1 pm and we want you to join us!

Bring your fellow vegetarians, vegans and veggie-supporters to come and march with us in the parade and to show Ottawa how significant the veg*n community is in the national capital region!

This Sunday’s Pride celebrations are going to be wicked fun. If you can make it this weekend to Pride, don’t miss this opportunity to march with us!

We ask that you wear orange (or green or something veg-related) and show up at the meeting place (Garden of the Provinces) no later than 12:30 pm.

RSVP on Facebook here or via email at ncva (dot) avcn (at) gmail (dot) com.

Can’t wait to see you there!

PS – Come visit the NCVA booth after the Pride parade at the Info Fair on City Hall grounds. Also, we are putting out a call to all bakers out there who would like to donate some bite-sized vegan baked goods to give away at the Info Fair to show how delicious being vegan really is! Please email the above address if you are interested.

Come march with the NCVA in the Capital Pride Parade on Sunday, August 28th at 1:00 PM (meet in advance at 12:30 PM at Garden of the Provinces).

This is a great opportunity to show the strength and numbers of the veg*n community in the national capital region as well as the NCVA’s support of the LGBTQ community of Ottawa!

Respond to this invite on Facebook or by emailing us at ncva (dot) avcn (AT) gmail (dot) com, so that we have an idea of how many marchers will be joining us on the big day.

We will have a banner and we ask that everyone try to wear something orange (or green) so that we look more like a cohesive group. If you want to wear a veggie costume, email us and we will let you know if there is one available. First come, first served!

Don’t forget to bring water to keep hydrated as well as prepare for the weather (hat, sunscreen, etc.).

Click here for more information about the parade (including the route).

The NCVA will also have a booth at the Info Fair to promote the association, educate the public on the benefits of a plant-based diet, and expose the resources and welcoming vegetarian community in the national capital region. If you are interested in volunteering/tabling at our booth, please email us with your preferred time (between 12 – 10 pm).

If you have any ideas, questions, or extra RSVP info, you can email us and let us know.