I attempted a gluten-free donut recipe the other night, and it was terrible. Truly awful.

But all the talk on the NCVA’s Facebook page left me wanting donuts still. So tonight I tried again.  But this time I decided to use my favourite non-gluten-free recipe, and substitute in gluten-free flour.

Why gluten-free? I just like to switch it up. I do not think that gluten is evil (unless you have celiac disease, of course), nor do I think gluten-free = healthy.  I have a colleague who can’t eat gluten, so when I make treats I try to make them gluten-free so that she can enjoy them too.

Cake donuts with icing and sprinkles

Adapted from this recipe.

Preheat oven to 350F. Put all the wet ingredients in a small pot on the stovetop on low and whisk together. Heat until just be warm to the touch. Mix the dry ingredients together in a large bowl. Add the wet to the dry and mix until just incorporated. Do not over mix.

Grease donut pan. Put the donut batter into a plastic baggie and cut the corner so that you can pipe the batter into the pan.

Bake for 12 minutes or so. Remove from oven. Cool on a wire rack and then decorate.

Here’s the recipe for the vegan, gluten-free waffles we served at the NCVA Charity Pancake Breakfast last April. 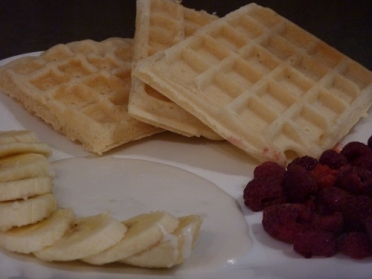 Mix all the dry ingredients in a large bowl. Pour the melted oil on top and the water on top of that (add a teaspoon of vanilla if you like as well). Stir until you have a batter that is “just pourable” (add more water by the tablespoon until you get the right consistency). One thing to note – the waffles are easier to handle when the batter is thicker, but crisper when the batter is thinner. One good thing about gluten free baking is that you can stir it a lot more without worrying about it getting tough.

Preheat waffle maker and spray with cooking spray or brush on oil. Only if necessary – my waffle maker is non-stick enough not to need anything. I usually preheat after I make the batter because I was told once that letting gluten-free batter sit for a bit improves it. I have no idea if that’s true or not. Certainly the ones I make first that sit for five minutes and the ones I make last that sit for maybe fifteen minutes don’t seem different to me.

For my “Belgian style” 4-waffle waffle maker, I use a quarter cup per square waffle. This probably varies depending on the machine.

At all costs, avoid letting the batter spill over the cooking plates onto the plastic. If it does, you’ve got a good hour of cleaning ahead of you!

Do definitely err on the side of too-little rather than too-much batter. Also, when you close the lid of the waffle maker, kind of hold it up a bit for the first couple of minutes of cooking, just to prevent the batter from getting squeezed and spilling over the edges.

When the waffle is ready, there’s a chance it will stick a bit to the plates. Unplug the waffle maker and just worry the edges with a fork until it pulls free. Kind of lightly jimmy the waffle rather than just trying to pull it off in one go.

Serve with maple syrup or your favourite toppings. We always serve it with syrup, bananas, and “coconut whipped cream”.

Coconut whipped cream is the easiest thing in the world to make. It’s basically the cream from a can of coconut milk that has separated, whipped with a bit of confectioner’s (icing) sugar.

To get the heavy cream out, open the can from the bottom and simply pour off the liquid. You’ll be left with a pretty solid mass of coconut cream at the bottom (actually the top) of the can. Then just whip for 3-4 minutes with about 1/3 cup of icing sugar and you’re done! If it’s pretty runny, put it in the fridge until it firms up. It might seem like putting it in the fridge overnight before using it is a good idea, but it can backfire. Sometimes coconut cream solidifies in a kind of “chunky” way, and no amount of beating it will get rid of the chunks until they “melt”.