Ottawa’s premier vegan food and lifestyle event, Ottawa Veg Fest, has drawn more than 10,000 visitors during its four-year run, including more than 3,200 in 2012. However, when its volunteer co-founders both stepped away after its fourth year, the event’s future became unclear.

But Ottawa Veg Fest will live on: The National Capital Vegetarian Association (NCVA), which has run Veg Fest since 2009, is pleased to announce that the 2013 event will be organized by Ottawa Local Motives (OLM). They have a long and successful history of organizing environmental and healthy living events in Ottawa, and will combine Veg Fest with an exciting new event, Yoga Fest and share the theme: “Celebrating a Healthy Ottawa.”

The NCVA will participate as an exhibitor, but will not be involved with the event’s coordination.

“We are pleased to have reached an agreement with Ottawa Local Motives, and have confidence that they will carry on the event in the spirit in which it was founded and executed for the past four years,” says Pamela Tourigny, Veg Fest co-founder and past-NCVA president. “The main organizers have both participated in Veg Fest as vendors in the past, and have a keen understanding of what the event is all about.”

Veg Fest and Yoga Fest will be held on Saturday and Sunday, June 22-23, from 10 am to 4 pm, indoors and outdoors on the campus of Saint Paul University (on Main Street). While previous Veg Fests were one day, the combined event will be two days, and will be significantly expanded. There will be speakers and vegan cooking demonstrations, as well as an array of yoga-related activities. The event will continue to showcase many of Ottawa’s finest vegan-friendly products and services.

I been feeling more creative in the kitchen lately, which probably has something to do with the weeks of -20C and colder temperatures.  People have shown an interest in my creations on Facebook, so I thought I’d share them here as well.

One thing I almost always prioritize is taking a couple of hours on Sunday to make my lunches for the week. It’s not that I have endless amounts of spare time; it is two hours I’m not spending on something else I want to do. However, I prioritize nourishing myself with delicious and healthy food, because it helps me feel better overall (I used to fight nodding off every afternoon, and felt generally sluggish). I suspect I make up those two hours in added productivity throughout the week.

Another positive trade-off is that I don’t have to think about what I’m going to have for lunch at all during the week. I take it all in on Monday and that’s the last I have to think of it. There’s no early morning scrambling to find something to take for lunch, and I like it that way.

This week’s lunches are packed with protein (lentils and quinoa), and kale.  I made a quinoa pilaf, and coconut curried lentil soup. (Note that both recipes are gluten-free, if a gluten-free bouillon/broth is used.) 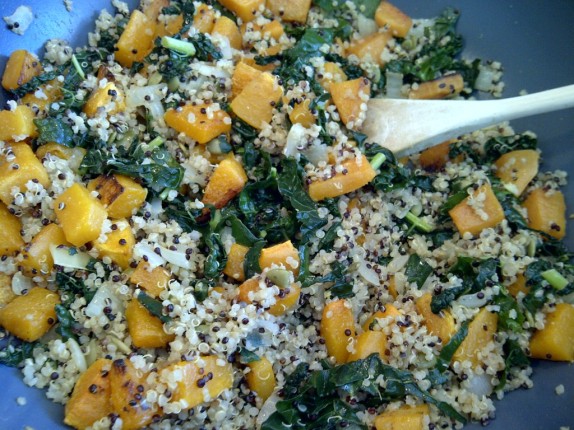 – about two cups of cooked quinoa (in some veggie bullion)

– half an onion, finely diced

Roast squash in a glass dish, coated with oil, salt and garlic, and while that’s happening cook your quinoa (probably about 3/4 cup uncooked).

In a frying pan sautee onions and garlic. Add kale, pumpkin seeds and other spices.

Then throw in the quinoa and squash once it’s done. Mix up and you’re done.

Add one cup of lentils, along with spice mix of your choice. Mix it all together before adding 1 can of coconut milk. Stir and then add your veggie broth. Bring it all to a gentle boil then lower the heat, cover, and let simmer for 25 minutes or so until the lentils are soft and amazeballs. Add kale towards the end, to let it wilt.

Saturday, February 16 at 6:30pm
134 York Street (between Cumberland and Dalhousie in the Byward Market)
Ring the white call button for the party / common room to be let in.

Bring foods that are: 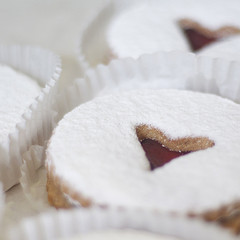 Each person should bring a VEGAN dish (with ingredient list) that serves 10 to 12 people, as well as your own plate, cutlery, and beverage. Also, please bring a serving utensil and a list of ingredients for your dish. Admission is $2 for NCVA members or students with valid ID, and $4 for non-members.

Please note: Everyone is welcome, whether you’re vegan, vegetarian, or non-vegetarian, but please ensure that the dish you bring is free of animal products. That includes any animal flesh, eggs, dairy/cheese, honey, etc. Consider becoming an NCVA member: Your support is needed to permit the NCVA’s work in the community. Not only that, it entitles the NCVA card holder member to discounts at many of Ottawa’s finest veg and veg-friendly restaurants. For a complete list, or to become a member online click here: ncva.ca/membership