The NCVA represented at the Algonquin College Environmental Awareness event, hosted by their Environmental Studies program on Feb. 1, 2011. It was heartwarming to see so much interest in vegetarian diets and what that means for our planet and the protection and sustainability of the environment. Equally as comforting was the fact that we were among friends; there were 3 other vegetarian-related booths at the event, one of which was a vegan cupcake bake sale (see photos below). Clearly, we’re in a time of change…

Reaching out to the student body and promoting a healthy and environmentally-conscious diet were the key messages on the table that afternoon. Also on the table were no less than two different kinds of vegan brownie samples (provided by baking enthusiast extraordinaire, Erin), which attracted even the most resistant skeptic in the crowd. It was also an opportunity to promote the NCVA to others, increase our membership base, and meet new friends of the NCVA. We sold some of our popular “Eat Like You Give a Damn” T-shirts and compiled a considerable list of passers-by highly interested in our association. It was amazing to see how many people hadn’t even heard of us. Hopefully we can encourage more volunteers to table at similar events in the future, so that we may connect with an even wider demographic.

Shaun here with a vegan pizza option for us vegan Ottawans.

Pavarazzi’s (locations at Somerset West at Lyon as well as 223 Laurier East) offer a delicious option for us vegans. Here’s what I suggest:

Thanks to Auntie Loo for this yummy suggestion!

Some days, even vegans don’t want to cook. Some days even vegans have terrible cravings for pizza. It’s not a crime to want to order in some “fast food” every so often, and I find that you can make your hungry omnivorous dinner companions happy if you suggest ordering pizza. But what does that mean for a vegan? Do vegans have to sacrifice taste to continue eating ethically at pizza places? Sometimes they do. But  I have discovered a way to make “Pizza Pizza” pizza vegan and equally if not more delicious than its dairy-laden counterparts.  And here’s how to do it.

Order your pizza at pizzapizza.ca. (I’d recommend ordering online, as you can make all your nitpicking selections without feeling awkward with the phone representative.)

Here are the necessary selections:

So next time you are ordering pizza, when it comes to taste, don’t just settle for “good enough”, go for “absolutely delicious to the extent that even your omnivore friends would agree”.

Politely declining a slice of Auntie Bertha’s fruitcake over the holiday season is to be expected. But how do you “politely” justify turning down your mother-in-law’s pot roast or her home-made butter cookies?

Let’s be honest, it’s all about food for the holidays. It’s that time of year more than any that you find being veg is not so easy. And I’m not talking about cravings for the unsavoury foodstuffs. I am addressing the bewildered faces and sighs of incomprehension when you make clear that you will not be eating any animals or animal products for the season (much in line with your eating habits every other day of the year). Some people believe that just because it is the holidays, you should try to at least fit in and relax your anti-social eating tendencies just to make others happy. The question is, do we relax any of our other ethics during the holiday season? Why should you consume animal products only to appease a group of people whom–though you probably love–don’t understand you fully? You need not be a militant activist vegan to just say no to the bombardment of animal food options. We’re all pressured either by others or our own traditional upbringing or tastes to indulge on something we normally wouldn’t, but perhaps from experience you’ll learn that you don’t ever feel better after doing it. The problem is how to not come across as the weird one who has joined some hippie cult and is only at the party to make others feel bad about themselves. So what do you do?

My advice? Just say no, thank you. Be polite, but firm when you are presented with food you don’t eat. If you were allergic, it might be easier to say no, but as it stands, allergies generally are treated with more respect and understanding than not eating certain food items for the sake of veganism. I can’t recommend whether or not you should elaborate on your reasons behind saying no. You may be prompted or questioned in some way which gives you no choice, but nothing is stopping you from putting a smile on your face and saying, “Let’s just leave it there. I’m happy that I am able to eat what I want without feeling scrutinised by others”. People need to learn to let you live your life without feeling threatened. If you are comfortable enough going to a holiday dinner where they serve meat and where many people will be eating it in front of you, then you should be confident that others should also feel comfortable with you declining those options at the dinner table.

For those of you who are surrounded by vegans and vegetarians for the holidays, count yourselves among the lucky few. But if you’re like me and find it hard to resist the disapproval of your family and friends during this time of the year just because you won’t eat their food, keep in mind that you’re not alone. Stick to your morals, avoid confrontation and debate, and remind your family/friends that in the spirit of the season, you are thankful that you can be together, sharing this moment, and respecting everyone’s personal wishes wholly. 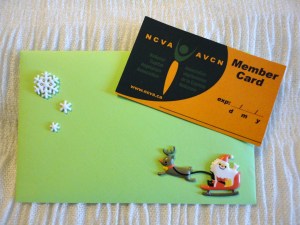 I’m still pretty new to Ottawa. It’s times like these when I attempt to get my feet wet in a variety of social scenes. Originating from Toronto, I was spoilt with the non-stop bombardment of social possibilities. Being vegetarian in Toronto was like being an official member of a popular club. Now in Ottawa, I’ve learned that to get my feet wet, I have to go to the water myself.

I was somewhat apprehensive at first, but mostly excited, to explore the world of the NCVA. Once I did, I realised that becoming a member was not only going to benefit me, but it was going to benefit many, and thus it was the right thing to do. Once I trained myself to stop calling the NCVA the “OVA” (which clearly doesn’t make sense from a vegan perspective), I was ready to fit in. That’s pretty much all it takes, because the organization is not-for-profit, volunteer-based, and vegetarian, whose mandate is to educate the public about the health benefits of a plant-based diet, and more generally, to improve public health. This is one group that could easily mesh well with my own set of ethics and beliefs and, for that matter, anyone else’s. Whether or not you are vegetarian, promoting health of the greater public and of yourself is a worthy cause.

And then there’s the whole social aspect. I often feel alone as a vegan in a meat-eating world (shameless plug). Generally, going to work, socialising with acquaintances, friends, and family, doing the groceries, or whatever, I started to feel like I was the only vegan out there and no one would ever understand me anyway. It still baffles me that people still think it is ok to mock or slam vegetarianism right to your face, as if they can’t see how the derision is prejudiced and discriminatory. But then I attended a NCVA event and immediately let out a sigh of relief–Finally! a place where I knew that I wouldn’t be made fun of for being culinarily different or more ethically sound. It was like my own personal vegetarian haven, where like-minded people admire and support me and my vegetarian lifestyle.

There was also the fact that with the NCVA, part of my social life could align with my morality, which is a great coupling. Being veg was always a great way for me to show the rest of the world that I care about animals (and the environment, and my personal health), but I was presented with the opportunity to take it a step further. By joining the NCVA, I realised I was supporting the greater cause of promoting a plant-based diet to the rest of the world. I was chipping in, wearing the badge, taking a stand! Coming out of the proverbial vegetarian closet was great for my social life, but I hope it also made it that much easier for anyone else who wants to do the same. Supporting the NCVA arguably equates to an increased vegetarian presence in Ottawa and thus a happier, healthier city.

Finally, this was my way of giving back to the community. Although nothing beats the warm and fuzzy feeling got from my childhood teddy bear (Mr. Fuzzy Wuzzy, if you don’t mind), a close second for me is always donating to a worthy cause. The best thing about donating to the NCVA is that I not only got the incredibly highly-sought after warm and fuzzies from the act of giving, but I also get a membership in return. I figured my $20 membership was a donation to something I cared about deeply, as well as an opportunity to connect to fun social events and new, like-minded people (and get great NCVA member discounts at great veg and veg-friendly restaurants in Ottawa!).

So, although I’m far from the poster child for the animal rights movement, nor am I saving the planet on a daily basis, I at least knew that, yes, I could make a small, but significant, difference just by being a part of the NCVA. I already felt like I was becoming more of an effective voice for those animals among us who don’t have one. The good news for you folks is that you can do it, too! You don’t even have to wait till the next NCVA event to land yourself a hot new membership. You can do it now right here from the convenience of your own home and at your leisure: ncva.ca/membership