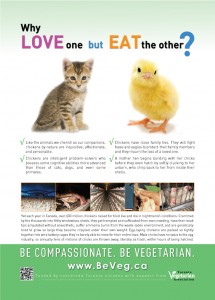 Many vegetarians and vegans saw or heard about the Be Veg campaign on the Toronto subway last year. It started as a small venture in 2009, and grew in part with support from the Toronto Vegetarian Association.

For those of you who are unfamiliar, here’s a small video for your viewing pleasure.

The NCVA is pleased to announce that this year; the campaign is coming to Ottawa. OC Transpo buses will be equipped with the ads as early as this coming June. 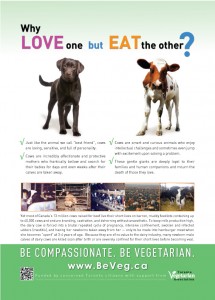 The campaign is being led by two dedicated volunteers who approached the NCVA seeking support.  OC Transpo has approved the ads; the Be Veg team in Toronto have provided their poster files, and the NCVA is the official campaign sponsor.

To support the campaign and help make it a reality, please ‘like’ the campaign’s Facebook page and share it with your friends. Also, if you would like to donate to the campaign you can go to the ChipIn account or visit the campaign organizers in person at Veg Fest.

Together we can help provide a voice for farm animals and promote a more compassionate lifestyle in the Ottawa community. Hope to see you all at Veg Fest.

20% off all online orders at wuxly.com! Must be a paid VegOttawa Association member ($20). This discount is good until the end of 2021. If you’re not a member yet then now would be a good time to sign up/renew(vegottawa.org) as you’ll save well beyond the cost of a membership with a single purchase. Wuxly also offers free shipping on all orders over $250. Wuxly is an amazing Canadian & Vegan company making high quality outerwear including parkas, mid-lightweight jackets, hats, shirts, masks and more. #wuxlymovement #613discounts #ottawavegan #ottawakindness #animalfree #613ottawa #animalfreefashion #animallovers #crueltyfree #crueltyfreebrands #crueltyfreelife #discountottawa #vegandiscounts #vegottawa #veganliving
We made it. Welcome to 2021! Hope everyone had a nice holiday and are remaining optimistic that this year will be a big improvement on the last.
MERRY CHRISTMAS! 🎄 to everyone celebrating this year. Hope you are enjoying some friend and family time, if only remotely, and got your hands on a plant-based holiday roast (or made your own) to dig in to. Looking forward to spending some quality time with everyone sooner than later. Warm holiday wishes from @vegottawa ✌️🎄💚
END OF THE YEAR EPIC HOLIDAY VEGAN PRIZE PACKS! (WEEK THREE)🎁🎉💚💚💚