I don’t know exactly why I decided to name this post Mama Africa. It just seemed right somehow.

Perhaps it’s because the food at Sunday’s East Africa Meetup was so fabulous that I want to cast off my Pol-Irish-Canadian identity and reconnect with my African roots, distant though they may be.

Perhaps it’s because I associate “Mama” with family and our record turnout of veg-minded folk game me a warm familial, “Yes, we can change the world through unbridled eating” kind of vibe.

Or perhaps it’s because I ate so much that I subsequently appeared to be several months pregnant.

Whatever the case, Sunday’s meetup was a roaring success. There were about 30 people, and local Ethiopian food expert Shaun confirmed that the food that day was particularly fine. Being an idiot, I forgot my camera, so I can’t provide any shots of it. That’s OK, though, because, frankly, Ethiopian food tastes a hell of a lot better than it looks.

Luckily, Shaun had his iphone handy and was able to take this shot of the group: 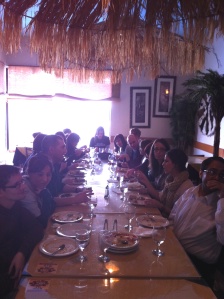 Note Neil and I with our contraband spoons. We bad! (Just kidding, they offered spoons to the injera-impaired)

In addition to the amazing food, the company was awesome and the conversation lively. I refused to break JJ out of prison, learned about Sudbury loons, shamelessly plugged the radio show Animal Voices (animalvoices.ca!) and scoffed at the folly that is flavoured beer.

I did make a bit of a faux pas when I told a pair of Sudburians that their city looks like the moon. But in my defense, I thought it was a compliment. Like getting to live in space but without having to spend a lot of money or learn math.

Anyway, not much else to say except thanks to all attendees for continuing to make the NCVA meetups a success. They just keep getting bigger and better!  I guess this will be the last one of the year, but Green Earth’s monthly Sunday brunch is not far off…